Are you driving to your Thanksgiving dinner this weekend? Beware that your risk while rolling down the highway may be higher or lower depending on the state in which you are traveling. When it comes to dying in a car accident, some states are more deadly than others, and the ones at the top may surprise you. See the chart, Car Occupant Fatalities by State, 2006, below:

Have late preterm births increased among mothers of all ages?

For more trends in late preterm births in the United States, visit the NCHS Data Brief at http://www.cdc.gov/nchs/data/databriefs/db24.pdf.

A new report from the National Center for Health Statistics shows that children with and without functioning difficulty differ greatly in their use of educational and health care services. This report presents estimates of basic actions difficulty, which includes difficulties related to sensory, motor, cognitive, and emotional or behavioral functioning, in U.S. children aged 5–17 years based on questions from the National Health Interview Survey (NHIS). Here are some results:

In addition, income was influential. Poor children (3%) were more likely to have movement difficulty than children who were not poor (2%). See the chart below.

Infant mortality – Where does the U.S. stand?

In 2005, the latest year that the international ranking is available for, the United States ranked 30th in the world in infant mortality, behind most European countries, Canada, Australia, New Zealand, Hong Kong, Singapore, Japan, and Israel. 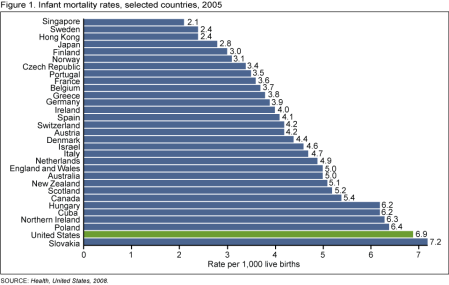