Two new reports released by the National Survey of Family Growth (NSFG) give insight into the use and methods of contraception among women aged 15-44.

The first report, Use of Emergency Contraception Among Women Aged 15-44: United States, 2006-2010, focused on trends and variation in the use of emergency contraception and reasons for use among sexually experienced women. The data from the report found that young adult women aged 20-24, who were never married, Hispanic or or non-Hispanic white women that attended college were most likely to have ever used emergency contraception; about one in four had done so.

Some other key findings from the study include: 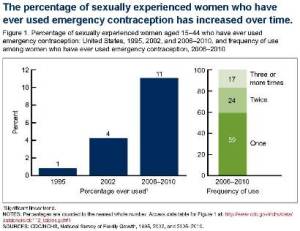 The second report, Contraceptive Methods Women Have Ever Used: United States, 1982-2010, highlighted the number of contraceptive methods women have used since 1982 and reasons for stopping use.  The report also followed trends among race, education, and religious affiliations.

This entry was posted on Thursday, February 14th, 2013 at 1:35 pm and is filed under contraception, Reproductive Health. You can follow any responses to this entry through the RSS 2.0 feed. You can leave a response, or trackback from your own site.