Alzheimer’s disease, the most common form of dementia among older adults, affects parts of the brain that control thinking, remembering and making decisions. It can seriously impair a person’s ability to complete daily activities.  An estimated 5.4 million people in the U.S. have Alzheimer’s disease, at a cost of $200 billion in health care expenses in 2012, including $140 billion in costs to Medicare and Medicaid. Health care costs related to the condition are expected to rise to 1.1 trillion dollars in 2050. 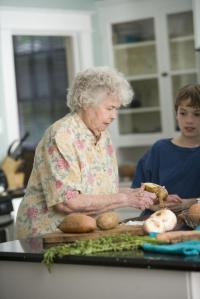 According to a new NCHS report, in 2010 Alzheimer’s disease was the sixth leading cause of death for all Americans, accounting for a total of 83,494 deaths and contributing to the death of 26,488 additional Americans.  Mortality from the disease has also steadily increased during the last 30 years.  The report also found that women had a 30 percent higher risk of dying from the disease than men.

• The age-adjusted death rate from Alzheimer’s disease increased by 39 percent from 2000 through 2010 in the United States.

• In 2010, among all states and the District of Columbia, 31 states showed death rates from Alzheimer’s disease that were above the national rate (25.1).

This entry was posted on Tuesday, March 19th, 2013 at 5:42 pm and is filed under Uncategorized. You can follow any responses to this entry through the RSS 2.0 feed. You can leave a response, or trackback from your own site.

One Response to Mortality from Alzheimer’s Disease