An early analysis of death records from October 2014 thru September 2015 suggests that death rates in the U.S. are higher than they were at the same point in 2014.

The findings are part of the “Vital Statistics Rapid Release Program,” a web-based quarterly release of data on various leading causes of death in the U.S. This preliminary analysis by NCHS shows that mortality rates were higher from October 2014-September 2015 compared to the same period the year before for many leading causes of death, including:

Mortality rates remained the same or were lower in the 12 months ending with the third quarter of 2015 for a few causes of death:

A new NCHS report examines the percentage of adults aged 18–64 who had an emergency room (ER) visit and their reasons for the most recent visit.

Health, United States Spotlights are infographics of selected health data available in Health, United States, the annual report on the health of the nation submitted by the Secretary of the Department of Health and Human Services to the President and Congress.

The full Health, United States reports are available at: http://www.cdc.gov/nchs/hus.htm

Smoking Prevalence and Cessation Before and During Pregnancy 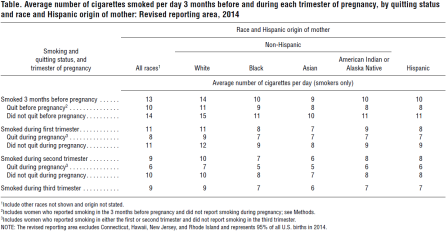 A new NCHS report presents findings on maternal smoking prevalence and cessation before and during pregnancy as collected on the 2003 U.S. Standard Certificate of Live Birth, for a 46-state and District of Columbia reporting area, representing 95% of all births in the United States.

Yesterday the Journal of the American Medical Association published a research letter entitled Major Causes of Injury Death and the Life Expectancy Gap Between the United States and Other High-Income Countries. From the JAMA:

The United States experiences lower life expectancy at birth than many other high-income countries. Although research has focused on mortality of the population older than 50 years, much of this life expectancy gap reflects mortality at younger ages, when mortality is dominated by injury deaths, and many decades of expected life are lost. This study estimated the contribution of 3 causes of injury death to the gap in life expectancy at birth between the United States and 12 comparable countries in 2012. We focused on motor vehicle traffic crashes, firearm-related injuries, and drug poisonings, the 3 largest causes of US injury death responsible for more than 100 000 deaths per year.

A new NCHS report presents selected estimates of health insurance coverage for the civilian noninstitutionalized U.S. population based on data from the January–September 2015 National Health Interview Survey (NHIS), along with comparable estimates from the 2010–2014 NHIS.