During 2000–2015, among adults aged 50–75 years, the use of colorectal cancer tests or procedures increased for all racial/ ethnic groups included in the analysis.

Continued Declines in Teen Births in the United States, 2015

The birth rate for teenagers aged 15–19 has fallen almost continuously since 1991, reaching historic lows for the nation every year since 2009.

Despite declines in all racial and ethnic groups, teen birth rates continue to vary considerably by race and ethnicity. Moreover, the U.S. teen birth rate remains higher than in other industrialized countries.

Childbearing by teenagers continues to be a matter of public concern.

A new report presents the recent and long-term trends and disparity in teen childbearing by race and Hispanic origin.

A new report from NCHS updates estimates for 15 selected health measures based on data from the January–March 2016 National Health Interview Survey (NHIS) and presents estimates from 1997 through 2014 for comparison.

The 15 Early Release measures are being published prior to final data editing and final weighting to provide access to the most recent information from NHIS. The estimates will be updated as each new quarter of NHIS data becomes available.

In both periods, within each age group participation declined with age and was lower for muscle strengthening activities compared with aerobic activities. 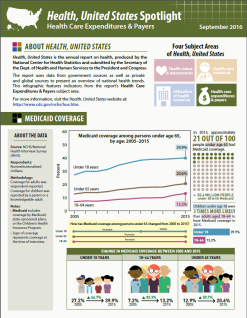 Health, United States Spotlights are infographics of selected health data available in Health, United States, the annual report on the health of the nation submitted by the Secretary of the Department of Health and Human Services to the President and Congress.

The National Health Interview Survey (NHIS) has monitored the health of the nation since 1957 and collects data on a broad range of health topics through personal household interviews. NHIS has collected health insurance data periodically since 1959 and annually since 1989. The NHIS health insurance questions have changed and expanded over time to reflect changes in health insurance coverage as well as questionnaire design. Since 1997, the content and flow of the health insurance section has remained relatively stable, incorporating new programs where necessary. For example, new questions added in 2014 obtain information about whether coverage was obtained through the Federal Health Insurance Marketplace and state-based exchanges.

The NHIS allows for both point-in-time uninsured estimates as well as full-year and part-year uninsured estimates. Three estimates of lack of health insurance coverage are published for each calendar quarter: (a) uninsured at the time of interview, (b) uninsured at least part of the year prior to interview (which includes persons uninsured for more than a year), and (c) uninsured for more than a year at the time of interview. In addition, NHIS provides estimates of both public and private coverage as well as enrollment in high-deductible health plans and exchange-based coverage. The NHIS may be used to monitor changes in health insurance coverage throughout the year as the survey is fielded continuously throughout the year.

Is Leukemia the leading form of cancer death among children and teens?

Declines in Cancer Death Rates Among Children and Adolescents in the United States, 1999-2014

Questions for Sally C. Curtin, M.A., Demographer/Statistician and Lead Author on “Declines in Cancer Death Rates Among Children and Adolescents in the United States, 1999-2014”

Q: How have trends in cancer death rates for children and adolescents in the United States changed over time?

Q: What type of cancer is taking our young people in the United States now – and which kind of cancer has been the greatest cause of death for youth over the years?

SC: I think when you say “childhood cancer”, most people first think of leukemia, as this type of cancer had been the leading type for decades–both in terms of incidence and deaths. However, what our report shows is that there was a shift during the 1999-2014 period, and the leading type of cancer causing death in children and adolescents aged 1-19 years is now brain cancer. This is a recent development as the number of brain cancer deaths first exceeded that of leukemia in 2011; 2014 was the first year that this difference was statistically significant.

Q: Was the decline experienced for all age groups within the 1-19 years of age range?

SC: Yes, all 5-year age groups experienced declines, with the youngest children, those aged 1-4, having the largest percentage decline of 26%. In 2014, death rates for children ages 1-4, 5-9, and 10-14 years were not significantly different from each other, while rates for older adolescents aged 15-19 were the highest of all groups.

Q: What are the trends among race and ethnicity groups in cancer death rates for young Americans?

SC: This report shows that there is parity in cancer death rates among white and black children and adolescents aged 1-19. The parity was there for all three years–1999, 2006, and 2014–and both groups experienced declines over the period.

Q: What do you think is the most significant finding in your new study?

SC: Probably the recent shift in the leading site, from leukemia to brain cancer. This is a noteworthy development in the history of childhood cancer as it was always leukemia until quite recently. Brain cancer deaths to children and adolescents aged 1-19 did not go up over the time period studied, but rather, fluctuated and remained stable. It was the decline for leukemia deaths that caused the crossover in numbers so that the percentage of all cancer deaths is now highest for brain cancer, accounting for 3-in-10 cancer deaths in 2014 for the pediatric population.

Fewer than half provided physical, occupational, or speech therapy (49%). One third or less provided mental health (33%), pharmacy (27%), and hospice services (12%).