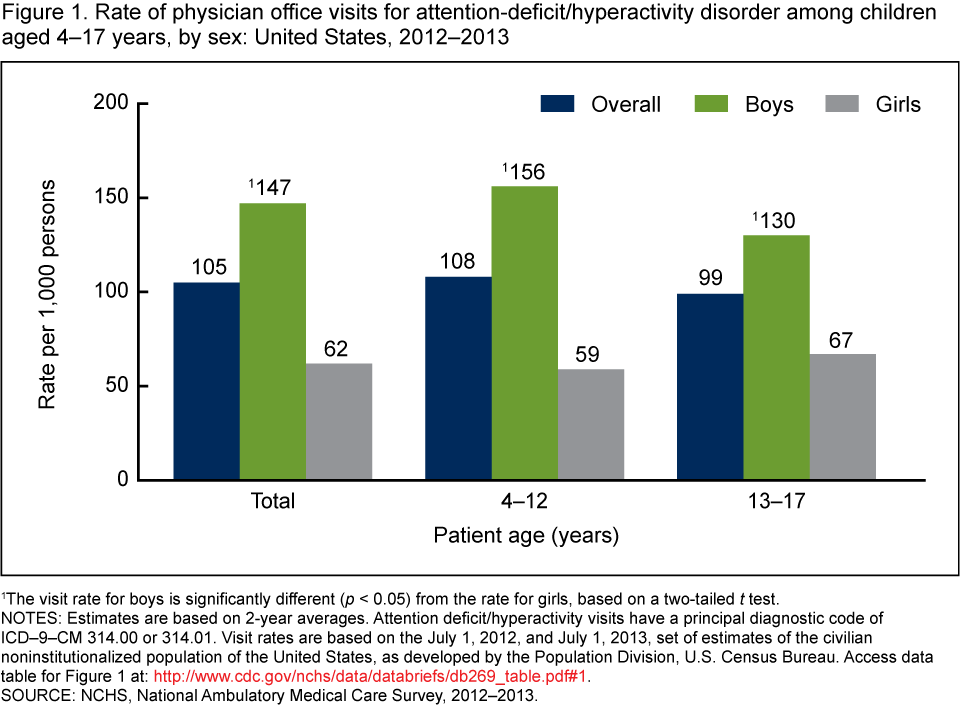 Q: Did we learn anything new from this new report about the problem of Attention-deficit/Hyperactivity Disorder (ADHD) among children?

MA: Yes, this report provides a snapshot of health care utilization related to ADHD among children aged 4-17 years. Specifically, it looks at visits to physician offices and uses nationally representative data from the 2012-13 National Ambulatory Medical Care Survey.  Based on a sample of 946 visits by children aged 4-17 years with a primary diagnosis of ADHD, an estimated annual average of 6.1 million physician office visits were made by this age group during 2012-13, corresponding to a visit rate of 105 visits per 1,000 children.

Q:  Does your research back up the notion that boys are more commonly afflicted with ADHD than girls?

MA: Our analysis did find that among children aged 4-17 years with a primary diagnosis of ADHD, the visit rate was more than twice as high for boys as girls.

Q: Is it true that medication is very often involved in the treatment of ADHD?

MA: Central nervous system stimulant medications were provided, prescribed, or continued at approximately 80% of these ADHD visits.  A total of 29% of ADHD visits included a diagnostic code for an additional mental health disorder.  In terms of what specialty of physician provided care at these visits, it was a pediatrician at 48%, psychiatrist at 36%, and general and family medicine physician at 12%.

Q: Was it surprising that 80% of office visits for ADHD involve medication?

MA: It is important to interpret this finding carefully.  Because the National Ambulatory Medical Care Survey is a visit-based survey, as opposed to population based, estimates of persons cannot be made.  Thus, the finding should not be interpreted as indicating that 80% of children aged 4-17 years with ADHD are taking CNS stimulant medications. It is possible that patients taking CNS stimulant medications tend to make more physician office visits than those not taking these medications.  This might be in order to monitor the medication, or for other reasons such as differences in the severity of disease between those who take medication and those who do not.  Although the use of medication in children with ADHD in our survey cannot be directly compared with population-based surveys, there is evidence from the latter that medication is frequently used.  An analysis of parent-reported data from the National Survey of Children’s Health found that among children aged 4-17 years, 69% of children with current ADHD were taking medication for their ADHD (the specific medication was not identified).

Q: Anything else you’d like to address about the report?

MA: Again, we think the significance of this report lies in providing a snapshot of health care utilization related to ADHD in children that is nationally representative.  We chose to investigate several variables to in our analysis that are of interest and provide important information.

This entry was posted on Wednesday, January 25th, 2017 at 9:08 am and is filed under ADHD, children, National Ambulatory Medical Care Survey. You can follow any responses to this entry through the RSS 2.0 feed. You can leave a response, or trackback from your own site.