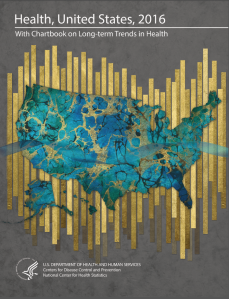 CDC today released Health, United States, 2016, the 40th annual report on the health of the nation from the Secretary of Health and Human Services (HHS) to the President and Congress.

This year’s report features a Chartbook on Long-Term Trends in health and health care delivery over the past 40 years. From declines in cigarette smoking and increases in prescription drug use to changes in expenditures for hospitals and home health care, the annual report also explores population changes that have affected patterns of disease, as well as health care access and utilization since 1975. The 27 charts and 114 tables present birth rates and infant mortality, life expectancy and leading causes of death, health risk behaviors, health care utilization and insurance coverage, and health expenditures.

The complete report and related data products are available on the Health, United States website at:
http://www.cdc.gov/nchs/hus.htm

This entry was posted on Wednesday, June 28th, 2017 at 4:30 pm and is filed under Health United States. You can follow any responses to this entry through the RSS 2.0 feed. You can leave a response, or trackback from your own site.