dental caries, Stat of the Day |

QuickStats: Percentage of Adults Aged 20 or Older Years Who Reported Being Told by a Doctor or Health Professional to Increase Their Physical Activity by Age Group and Obesity Status

During 2011–2014, 33.2% of adults aged 20 years or older reported that a doctor or health professional told them to increase their physical activity.

More than half (52.2%) of adults aged 20 years or older with obesity reported that a doctor or health professional told them to increase their physical activity compared with less than a quarter (22.3%) of adults without obesity.

This pattern remained the same for all age groups examined. For both adults with and without obesity, the proportion who reported being told to increase their physical activity increased with age.

Q: Why is it important to study the prevalence of high total and low HDL cholesterol?

MC: High levels of total cholesterol and low levels of HDL cholesterol are risk factors for cardiovascular disease, the leading cause of death in the United States.

Also, as part of its objectives to improve the health of the U.S. population, Healthy People 2020 has included the goal of reducing the proportion of adults with high total blood cholesterol to less than 13.5%. Both men and women aged 20 and over currently meet this goal. However, not all subgroups meet this target.

Q: Was there anything in the report that surprised you?

Q: How does the prevalence of high total and low HDL cholesterol breakdown by age and gender in U.S.?

NHANES, Stat of the Day |

#STATOFTHEDAY Chronic lower respiratory disease is the 3rd leading cause of death in US https://t.co/vMMHEsb5xq #RespiratoryCareWeek

For all three urbanization levels, infant mortality rates were significantly lower in 2015, compared with rates in 2007.

Q: What made you decide to conduct this study on hypertension prevalence and control?

CF: The primary motivation for conducting this study was to offer the public updated data on U.S. adults who have high blood pressure. Every two years new data are available for us to provide updated estimates of hypertension prevalence and control. Data were recently released for the 2015-2016 National Health and Nutrition Examination Survey, and our next step was to analyze the data and provide accessible statistical information that might guide actions to improve the health of the American people.

Q: Was there a finding in your new study that surprised you, and if so, why?

Q: What do you think is the most interesting demographic finding among your new study’s findings for 2015-2016 – age, race, sex?

Q: When you identified adults with controlled hypertension in your study, was that through participants’ self-reporting that they were on medication for high blood pressure or another method? If it was self-reporting, how do you know it’s true?

CF: I think the take-home message of this report is that hypertension prevalence has remained unchanged since 1999 at around 29%, and that just under half of adults with hypertension have their hypertension under control. High blood pressure among U.S. adults is a persistent and prevalent concern that is a serious factor in the health and well-being of the nation. The statistics in this new report show that we have yet to meet the Heathy People 2020 Goal of 61.2% for hypertension control.

Fact or Fiction: Has the percentage of adults in the U.S. who are obese leveled off in the last several years?

Prevalence of Obesity Among Adults and Youth: United States, 2015–2016 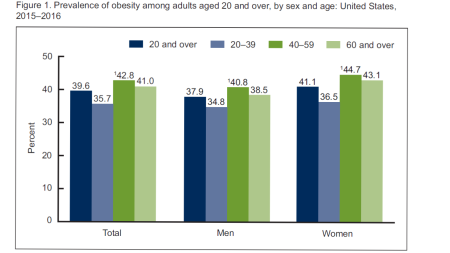 Q: There seems to be confusion about whether obesity is going up or is stable. Could you clarify based on your new data?

Q: Would it be accurate to say that, among adults at least, the percentage who have obesity hasn’t changed much in recent years, but has definitely increased over the past 10 or 15 years?

CH: The prevalence of obesity among adults has definitely increased since 1999-2000. Since 1999-2000 the prevalence has increased almost 10 percentage points from 30.5% to 39.6%, or almost 40%. From one 2-year cycle to the next, changes in obesity prevalence may appear small, but when we look over time, we are better able to see trends.

Q: Between adolescents, school-aged kids, and pre-schoolers, what are the most significant patterns among our youth, based on these new data?

CH: Among youth, these data show that school-aged kids and adolescents have a higher prevalence of obesity than pre-schoolers. This is the same pattern we have seen in previous reports from this survey.

Q: The U.S. has changed quite a bit demographically over the past 30 years, and this corresponds with large increases in the percentages who are obese. With obesity prevalence being significantly higher among U.S. Hispanics, would it be accurate to say that at least some of the increase in obesity prevalence in the U.S. is a characteristic of demographic change?

CH: It’s true that both non-Hispanic black and Hispanic adults have a higher prevalence than non-Hispanic whites and non-Hispanic Asians, although the patterns are different in men and women. Previous reports have found that trends over time are not explained by these demographic changes.

For this report we focused on a cross-section of the US population in 2015-2016, but we are continuing to analyze the data, including the impact of demographic changes on trends over time.

Q: What finding in your new report did you find most striking?

CH: What I found most striking is that almost 40% of adults in the US had obesity in 2015-2016. This is almost 10 percentage points higher than the prevalence was in 1999-2000. It is the highest prevalence of obesity ever reported among all US adults.

Q: What is the best advice for those who want to control their weight?

CH: I recommend that anyone who wants to lose weight talk to their healthcare provider. People can also learn more about US diet and physical activity guidelines at health.gov.

Q: Anything else you’d like to note about the new study?

CH: Measured height and weight is the gold standard for generating accurate estimates of obesity prevalence. The National Health and Nutrition Examination Survey is unique in that it combines both interviews in the home and physical examinations in mobile examination centers, and it is the only national survey where people’s height and weight are physically measured.