Beginning with data for 2001, NCHS introduced categories *U01-*U03 for classifying and coding deaths due to acts of terrorism. The asterisks before the category codes indicate that they are not part of the International Classification of Diseases, Tenth Revision (ICD-10). Description of the specific 4-digit codes can be found at NCHS Classifications of Diseases, Functioning and Disability: Appendix I. Deaths classified to the terrorism categories are included in the categories for Assault (homicide) and Intentional self-harm (suicide) in the 113 cause-of-death list. Additional information on these new categories can be found at NCHS Classifications of Diseases, Functioning and Disability: Classification of Death and Injury Resulting from Terrorism. Terrorism related deaths in this data do not represent a final count of deaths resulting from the terrorist attacks on September 11, 2001, as this figure had not been determined. As of October 24, 2002, death certificates were issued for 2,957 of the estimated 3,028 individuals believed to have died as a result of the September 11, 2001 attacks. Of these, four were issued for terrorists and are classified as suicides. The criteria for issuing a death certificate for those believed to have died in the attacks differed by state, reflecting differences in state laws regarding death certification. Pennsylvania issued a death certificate for every individual, including the terrorists. Death certificates were not issued for any of the terrorists in Virginia or New York City. Virginia issued a death certificate only for those victims whose remains were identified. New York City issued a death certificate for those whose remains were identified or, if remains were not recovered, for those whose families applied for a death certificate. For more detailed information regarding New York City’s processing of these deaths, see Deaths in World Trade Center Terrorist Attacks—New York City, 2001.

In the subsequent years after 9-11, from 2002 through 2016 (the most recent year for final data), there were 9 deaths in the United States attributed to terrorism. 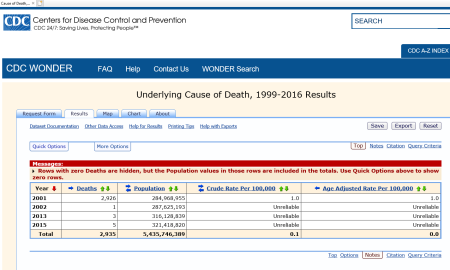