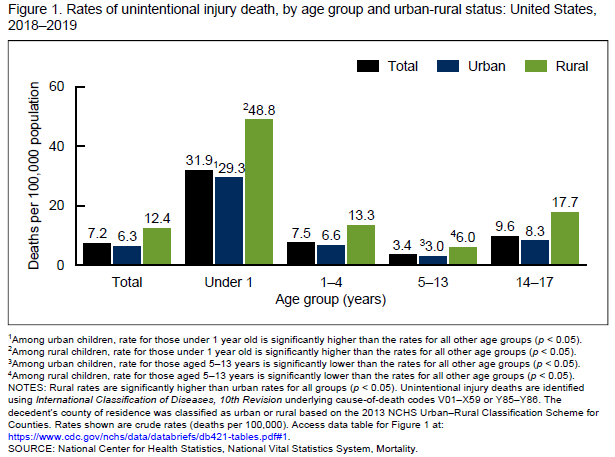 Q: Can you describe what unintentional injury deaths are?

Q: How did the data vary by age groups?

MG: Rates of unintentional injury deaths differ across age groups. In both urban and rural areas, unintentional injury death rates were highest among children aged under 1 year, followed by a decline in the 1–4 and 5–13 age groups, and then increasing in the 14–17 group. Although this pattern was seen in both urban and rural areas, rural rates were consistently higher than urban rates for all age groups.

Q: Do you have trend data that goes further back than 2018?

NOTES: Unintentional injury deaths are identified using International Classification of Diseases, 10th Revision underlying cause-of-death codes V01–X59 or Y85–Y86. The decedent’s county of residence was classified as urban or rural based on the 2013 NCHS Urban–Rural Classification Scheme for Counties. Rates shown are crude rates (deaths per 100,000).

Q: What is the main takeaway message here?

MG: There are two main takeaways here. The first is that when discussing unintentional injury deaths, there are disparities for children between urban and rural areas. These disparities are found across age groups, and across multiple injury mechanisms.

Q: What are the reasons why unintentional injury death rates are higher in rural vs. urban areas?

MG: Data from this report suggests that different mechanisms drive the overall unintentional injury rate for each age group. Urban-rural disparities between mechanisms provide insight into the larger disparities seen in the overall unintentional rates. For example, among children under the age of 1, the rural rate of deaths involving suffocation were significantly higher (42.1 per 100,000 population) than urban rates (24.9). For that age group, suffocation was a major driver of disparity seen in the total unintentional injury death rate, which was 48.8 for rural areas and 29.3 for urban areas.

Among children aged 5-13 and 14-17, not all mechanisms show a significant disparity. However, some of the largest drivers of the overall unintentional death rate (that is, mechanisms with a larger number of deaths) for each group did. For example, motor vehicle traffic death rates were twice as high in rural areas compared to urban areas for both age groups.

This data brief does not get into the specific reasons for disparities within specific mechanisms. However, there is a wide body of research that has associated urban-rural differences in injury mortality to a variety of factors. These include differences in types of activities undertaken by children living in rural and urban areas and the built environments that they undertake these activities in. Studies have also suggested that differences in patterns of safety equipment use and the practice of safety-related behaviors may play a role in differing mortality rates. Access to care has also been pointed to as an issue, when considering first responder response times in rural settings compared to urban settings, and access to medical facilities, including high level trauma care. The introduction to the report cites several of these studies.

This entry was posted on Wednesday, October 27th, 2021 at 11:30 am and is filed under children, Data Briefs, Deaths, injury, rural, Unintentional Injury, urban. You can follow any responses to this entry through the RSS 2.0 feed. You can leave a response, or trackback from your own site.