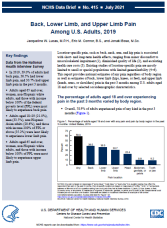 The second report provides national estimates of any pain regardless of body region as well as estimates of back, lower limb (hips, knees, or feet), and upper limb (hands, arms, or shoulders) pain in the past 3 months among U.S. adults aged 18 and over by selected sociodemographic characteristics.

Influenza Vaccination in the Past 12 Months Among Children Aged 6 Months–17 Years: United States, 2019

Questions for Lindsey Black, Health Statistician and Lead Author of “Influenza Vaccination in the Past 12 Months Among Children Aged 6 Months–17 Years: United States, 2019.”

Q: Is this the most recent data you have on this topic?  If so, when will you release 2020 vaccination data?

Q: Do you have influenza vaccination data for adults?

LB: Yes, some information on adults is available in the interactive summary health statistics for adults, located at : https://www.cdc.gov/nchs/nhis/shs.htm

Q: Do you have trend data that goes further back than 2019?

LB: Influenza vaccination has been collected as part of the sample child on NHIS since about 2005. However, in 2019, there were significant changes to the survey and we have not yet evaluated how that may result in a break in the trend, or the appropriateness of assessing trends across survey period (2019 vs earlier than 2019).

LB: I found it surprising that the amount of regional differences observed. It is so interesting that starting at the East South Central states, and moving North, we see a gradual improvement to 65.3% of children lving in New England that had a vaccination.

Q: Where can I get COVID vaccination data?  Will this be included in future NHIS data?

NHIS began collecting that and it will be included in the 2021 data release in the fall of 2022. In the meantime, Covid-19 vaccinations in the United States provided by CDC are located at:  https://covid.cdc.gov/covid-data-tracker/#vaccinations

Fruit and Vegetable Consumption Among Adults in the United States, 2015–2018

Q: Why did you decide to research urgent care center and retail health clinic utilization among children?

LB: This is a growing segment of health care delivery system where many American’s seek both preventative and acute care. In addition, 2019 was the first time that utilization of urgent care was assessed among respondents of the National Health Interview Survey.

LB: I was surprised there was not a linear relationship between age and utilization. Often, we see as age increases, service utilization decreases, and other work specific to urgent care utilization has found that adolescents and young adults are more likely to utilize urgent care and retail-based clinic care compared to children.

Q: Can you explain what retail health clinic utilization is?

LB: Urgent care and retail health clinics are facilities that provide health care services to patients and you do not need to make an appointment ahead of time. They can be free standing, or within a grocery store or retail store setting. Services provided often range from routine vaccination to non-emergency acute care.

Q: Is there any trend data for this report?

LB: No. This is the only year of data available that includes urgent care and retail health clinic utilization measures.

LB: More than 1 in 4 U.S. children (26.4%) have had one or more visits to an urgent care center or retail health clinic in past year according to 2019 data from the National Health Interview Survey.

A new NCHS report presents trends in prepregnancy obesity for 2016 through 2019 by maternal race and Hispanic origin, age, and educational attainment. Trends by state for 2016–2019 and 2019 rates also are shown. 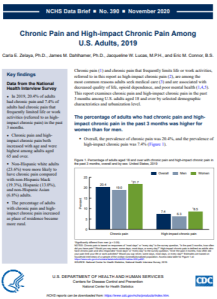 AT: It was interesting to see that the percentage of breakfast intake among adolescents was more than 20 percentage points lower than younger children: 73% of adolescents aged 12-19 and 96% of children aged 2-5 years old consumed breakfast.

AT: We assessed data from the National Health and Nutrition Examination Survey, in which survey participants were asked to report all foods and beverages they consumed in the previous 24 hours, from midnight to midnight. We looked at children and adolescents, aged 2-19 years who reported eating “breakfast” (or “desayuno”).

AT: The National Health and Nutrition Examination Survey has been collecting diet intake information since 1971, for almost 50 years. We focused on breakfast consumption in the past 10 years for this report.

Q: Is there data on lunch and dinner?

AT: Yes, the National Health and Nutrition Examination Survey, which is the source of the data, conducts a 24-hour dietary recall, by which we gather information on all foods and beverages consumed by the participant in the previous 24 hours. Diet intake data is available for researchers to assess which meals and snacks were reported, the time of the day for each meal or snack, and the foods and beverages that were consumed. For this data brief, we focused on breakfast consumption from 2015 to 2018.