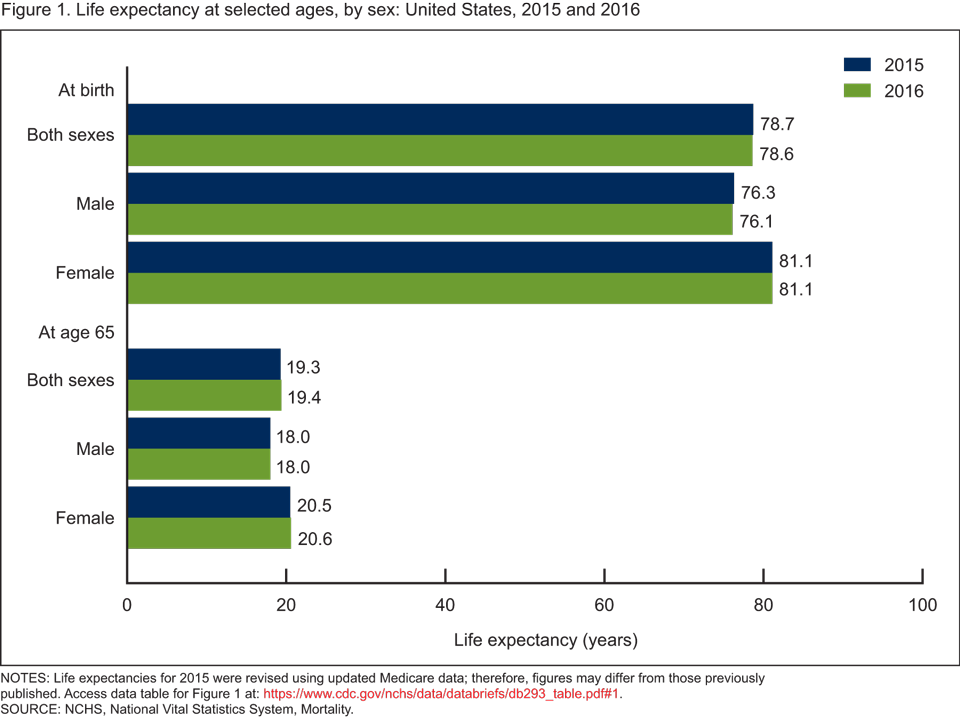 Questions for Sally Curtin, Statistician and author of “Drug Overdose Deaths Among Adolescents Aged 15-19 in the United States: 1999-2015”

Q:  Do trends in overdose deaths among teens reflect the trends of older adults in the U.S.?

SC: There are some similarities, but also differences.  Both teens and older adults experienced the sharp increases from 1999 through the mid-2000s.  But unlike older adults, whose rates continued to increase, teenagers actually had a decline in drug overdose death rates through 2014, before an upturn in 2015.  All of this decline was for males as the rates for females stabilized from 2004-2013 before increasing again.

Q: Do we know why trends for teens dropped during the first several years of the millennium?  And why they increased sharply in 2015?

SC: There are many public health initiatives to combat the rising drug overdose death rates.  While we do not know the exact reason for the decline, we know the specific drugs that were involved—opioids, cocaine, and benzodiazepines.  For the opioids, it was the frequently prescribed drugs—methadone and natural and semisynthetic (oxycodone, morphine) that had declines for teens since the mid 2000s.  Other opioids such as heroin and synthetic opioids (including fentanyl) fluctuated but generally increased over the 1999-2915 study period.  The continued rise in drug overdose deaths involving heroin and synthetic opioids from 2014 to 2015 contributed to the uptick between those years.

Q: What are the differences in overdose deaths by gender and race?

SC: We did not examine race in this report because the numbers were too small for some groups.  By gender, the drug overdose death rate for males was higher for females for every year of the 1999-2015 period and was 70% higher in 2015.  While males had a greater increase in drug overdose death rates than females between 1999 and the mid-2000s, they also declined by about a third between 2007 and 2014 before increasing again.  The rate in 2015 was still lower than the 2007 peak.  Females had an increase, albeit smaller than for males, and then their rate stabilized between 2004-2013 before increasing again.

Q:  What type of drugs are killing these teens?

SC: As for the population at large, the majority of drug overdose deaths involve opioids.  When we examined the specific type of opioid involved, heroin is the leading drug involved and rose fairly steadily throughout the study period.  Synthetic opioids (including fentanyl) were lower than other opioid drugs through the early years of the period, but then doubled between 2014 and 2015.  This large increase for synthetic opioids has also been observed for the population at large.

We did not look at combinations of drugs.  Often, there is more than one drug involved so the categories we show are not mutually exclusive. 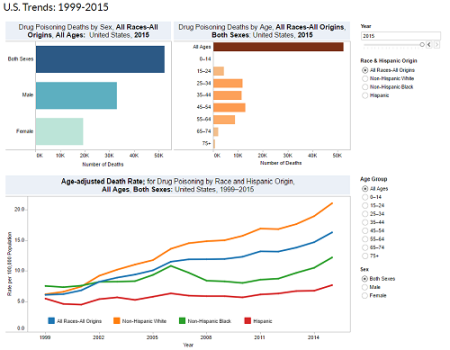 Has the death rate from drug overdoses in the U.S. increased most rapidly among young people over the last decade and a half?

The rate of drug overdose deaths involving heroin increased slightly during 2006–2010 but more than tripled during 2010–2015 for all age groups shown.

In 2015, the rate of drug overdose deaths involving heroin was highest for persons aged 25–34.

Q: Why did you decide to do a report on drugs most frequently involved in drug overdose deaths?

MW: From our routine mortality statistics, we know that drug overdose death rates are increasing, and we have some insight into the classes of drugs involved. This report presents findings from a new method we developed to identify the specific drugs involved in drug overdose deaths, which gives us a more complete and granular understanding of the problem.

Q: Do you have 2015 data on drug overdose deaths? If not, when do you anticipate this being released?

MW: NCHS just released the 2015 mortality data at the beginning of December. CDC released an MMWR last week describing drug overdose deaths in 2015 and some of the drug classes involved. NCHS is currently analyzing the 2015 literal text data using the new method to report on the specific drugs, and plan to have those results available soon.

Q: What are the most prevalent drugs involved in drug overdose deaths?

MW: The 10 drugs most frequently involved in overdose deaths included the following opioids: heroin, oxycodone, fentanyl, morphine, methadone, and hydrocodone; the following benzodiazepines: alprazolam and diazepam; and the following stimulants: cocaine and methamphetamine.

MW: We suspected that multidrug toxicity played a role in drug overdose deaths, and this analysis revealed that nearly half of these deaths where at least one drug was mentioned on the death certificate, involved more than one drug. We were surprised that the top 10 drugs were often mentioned in combination with each other. We were also pleasantly surprised to find that the reporting on specific drugs improved with the percentage of death certificates mentioning at least one specific drug increasing from 67% in 2010 to 78% in 2014.

Poisoning is the leading cause of injury death in the United States. Drugs—both pharmaceutical and illicit—cause the vast majority of poisoning deaths.

NCHS uses the National Vital Statistics System (NVSS) to monitor deaths due to drug poisoning. NVSS collects and compiles mortality information from death certificates in all 50 states and the District of Columbia. NCHS identifies the number of drug poisoning deaths from the underlying cause of death on death certificates. Multiple causes of death are used to identify the drugs involved. Approximately 23% of drug poisoning deaths lack information on the specific drugs involved.

Drug poisoning (overdose) is the number one cause of injury-related death in the United States, with 43,982 deaths occurring in 2013. While much attention has been given to deaths involving opioid analgesics, in recent years there has been a steady increase in the number of drug-poisoning deaths involving heroin. A recent study using data from 28 states reported that the death rate for heroin overdose doubled from 2010 through 2012.

Using data from the National Vital Statistics System, a new NCHS report provides a description of trends and demographics for heroin-related drug-poisoning deaths in the United States from 2000 through 2013.

Increase in poisonings from opioid painkillers

NCHS recently released the report titled “Increase in Fatal Poisonings Involving Opioid Analgesics in the United States, 1999-2006.” This report shows the explosion of fatal poisonings from opioid painkillers over the past 7 years. For example, from 1999 through 2006, the number of fatal poisonings involving opioid analgesics more than tripled from 4,000 to 13,800 deaths. Opioid analgesics were involved in almost 40% of all poisoning deaths in 2006.The differences among states is also striking:

For more information, visit the report at http://www.cdc.gov/nchs/data/databriefs/db22.htm.