Urban-rural Differences in Visits to Office-based Physicians by Adults with Hypertension: United States, 2014–2016 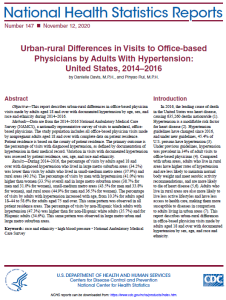 Questions for Danielle Davis, Health Statistician and Lead Author of “Urban-rural Differences in Visits to Office-based Physicians by Adults With Hypertension: United States, 2014–2016.”

Q: Why did you decide to research urban-rural differences in visits to office-based physicians by adults with hypertension?

DD: During grad school, I worked on a project with the Baltimore City Health Department where I learned about racial disparities in Hypertensive Disorders of Pregnancy. Black women, and sometimes their babies were dying from this disorder without concrete reasons as to why. Some of the women had never been diagnosed with hypertension or other risk factors but would still develop this disorder. It led us to looking at other causes, such as environmental and residential stressors considering these women live in a unique urban setting. I decided to take this knowledge and look at hypertension in the US population as a whole to see how hypertension differed by urban-rural residences.

DD: It was surprising to see a significantly higher percentage of hypertension in non-Hispanic Black adults in Large metro urban and large metro suburban counties in comparison to non-Hispanic White and Hispanic adults.

DD: Data are from the 2014–2016 National Ambulatory Medical Care Survey (NAMCS), a nationally representative survey of visits to nonfederal, office-based physicians. This data is collected by the National Center for Health Statistics.

Q: Is this the most recent data you have on this topic?

DD: Yes.  This is the most recent data we have on this topic.

Q: Why did you decide to do a report on health in American Indian and Alaska Native (AIAN) adults?

Q: Can you summarize how the data varied by urbanization level?

MV: This report has two objectives.

The second objective was to assess whether the percentage of American Indian and Alaska Native adults with selected conditions was similar to the percentage found, on average, among all U.S. adults. The report findings indicate that American Indian and Alaska Native adults were more likely to be in fair or poor health, have a disability, have multiple chronic conditions, and to have been diagnosed with hypertension and diabetes compared with all U.S. adults. This finding was consistent across most urbanization levels.

Q: Is this the first time you have reported data on AIAN?  If not, do you have any trend data?

MV: Yes, this is the first time we have used NHIS data to examine selected health conditions among American Indian and Alaska Native adults in the US. We are not aware of a previous trend report and have not examined trends among this population ourselves.

MV: Among American Indian and Alaska Native adults, the conditions examined did not follow a single pattern by urbanization level, and across most urbanization levels, the percentage of American Indian and Alaska Native adults with these selected conditions was higher than found on average among U.S. adults.

Q: What made you decide to conduct this study on hypertension prevalence and control?

CF: The primary motivation for conducting this study was to offer the public updated data on U.S. adults who have high blood pressure. Every two years new data are available for us to provide updated estimates of hypertension prevalence and control. Data were recently released for the 2015-2016 National Health and Nutrition Examination Survey, and our next step was to analyze the data and provide accessible statistical information that might guide actions to improve the health of the American people.

Q: Was there a finding in your new study that surprised you, and if so, why?

Q: What do you think is the most interesting demographic finding among your new study’s findings for 2015-2016 – age, race, sex?

Q: When you identified adults with controlled hypertension in your study, was that through participants’ self-reporting that they were on medication for high blood pressure or another method? If it was self-reporting, how do you know it’s true?

CF: I think the take-home message of this report is that hypertension prevalence has remained unchanged since 1999 at around 29%, and that just under half of adults with hypertension have their hypertension under control. High blood pressure among U.S. adults is a persistent and prevalent concern that is a serious factor in the health and well-being of the nation. The statistics in this new report show that we have yet to meet the Heathy People 2020 Goal of 61.2% for hypertension control.

Hypertension, NHANES, Stat of the Day |

Fact or Fiction: Is a growing percentage of Americans with hypertension unaware they have it?

Characteristics of Adults with Hypertension who are Unaware of their Hypertension, NHANES 2011–2014

Questions for Ryne Paulose, NHANES’ Associate Director for Science and Lead Author of “Characteristics of Adults with Hypertension who are Unaware of their Hypertension, NHANES 2011–2014”

Q: What made you want to do a report on adults with hypertension who are unaware of their hypertension?

RP: We have a number of NCHS brief reports on prevalence of hypertension, awareness, control, and treatment.  We wanted to publish a brief report that further characterizes adults who are unaware of their hypertension. Being undiagnosed and unaware of having hypertension is a problem since these blood pressure for these adults will remain above normal levels and have potentially damaging effects.

Q: It looks there was a major decline in the number of adults with hypertension that were unaware they had it since 1999-2002 data?  Do you know why there has been a significant decline?

We did not specifically examine reasons for the decline in this brief report. But in our report, we do see that the percent unware was lower among adults with health insurance or with increased healthcare visits in the prior year. This implies that increased contact with a healthcare provider increases the chances that high blood pressure will be identified and diagnosed.

Q: Were there major differences in income and education level among adults with hypertension who were unaware of their hypertension?

Q: Was there anything in your report that surprised you?

RP: The oversampling of Asian Americans in NHANES is new as of 2011. So, the estimates for Non-Hispanic Asians was an unknown from earlier years. So, the differences we reported did surprise me. Further analysis is in progress to better understand these differences.

Age Differences in Visits to Office-based Physicians by Adults with Hypertension: United States, 2013

Q: Why did you choose age differences as the demographic focus of your study?

JA: I wanted to examine this demographic because of the dramatic differences by age I was seeing in preliminary analyses. For instance, the increase by age in the percentage of adult visits to office-based physicians made by adults with hypertension is large–going from 9% of adults aged 18-44 to 58% of adults aged 75 and over.

Q: What do you think is the most significant finding in your new study?

JA: Probably, the most significant finding is that 34% of all adult visits to office-based physicians were made by adults with hypertension, representing an estimated 259 million office visits in 2013.

Q: How likely was it that medication(s) for high blood pressure were included as part of the treatment that Americans with hypertension were getting at their doctors’ offices?

Q: Among American adults with high blood pressure, is hypertension the only condition they have when they visit their doctors’ offices?

Q: What is the take home message of your report?

Hypertension is a public health challenge in the United States because it directly increases the risk for cardiovascular disease.

An NCHS report presents updated estimates for the prevalence and control of hypertension in the United States for 2011–2014.