Maternal Characteristics and Infant Outcomes in Appalachia and the Delta

Questions for Anne Driscoll, Lead Author of ”Maternal Characteristics and Infant Outcomes in Appalachia and the Delta.”

Q: Why did you decide to do focus your report on maternal characteristics and infant outcomes in the Appalachia and Delta?

AD: The general goal was to explore regional patterns in health risk factors and outcomes.

Q: How did the data vary by region?

AD: In general, maternal characteristics and infant outcomes were the worst in the Delta, followed by Appalachia; they were generally best in the rest of the U.S.

Q: Was there a specific finding in your report that surprised you?

AD: Although outcomes did vary across regions for infants born to non-Hispanic white and black women, they did differ between Appalachia and the Delta for infants of Hispanic women and usually did not differ between these two regions and the rest of the U.S.

AD: Differences in maternal characteristics account for some, but not all, of the differences in infant outcomes between Appalachia, the Delta and the rest of the U.S.

Q: Why do you think there are differences in maternal characteristics among the Delta, Appalachia and the rest of the U.S.?

AD: Appalachia and the Delta are two of the most disadvantaged regions in the U.S., with higher poverty, poorer overall health (behaviors and outcomes) and lower educational levels than the U.S. as a whole. We would expect that the characteristics of women giving birth in these regions to reflect these patterns (e.g., lower educational attainment, higher rates of obesity and smoking, and higher rates of WIC receipt and Medicaid).

Infant Mortality by Age at Death in the United States, 2016

Questions for Danielle Ely, Ph.D., Health Statistician and Author of “Infant Mortality by Age at Death in the United States, 2016”

Q:  What made you decide to focus on the age when infants die in this new analysis of infant mortality in the United States?

DE:  We focused this study on the age when infants die for a number for reasons. Age at death is an important factor in the risk of infant mortality. One important statistic is that infants are more likely to die before 28 days of age (neonatal deaths) than infants who live to 28 days and older (postneonatal deaths.) By presenting infant mortality rates by age at death, we show the differences in the likelihood of death between these two infant groups — information that can help inform the U.S. Public Health Community, families, and physicians on this critical age factor in infant lives and deaths.

Q:  What sort of trend data do you have for the demographics and the cause of death data in your new study on infant mortality at the age of death?

DE:  We have interesting trend data here in this report, as well as other public-use resources that are available for further research and data. Our new report looks at the overall trends in infant, neonatal and postneonatal mortality rates from 2007 (the most recent peak in infant mortality) through 2016. For 2016, we looked at infant mortality rates by mother’s race and Hispanic origin and age and cause of death.

Q:  Was there a result in your study’s analysis of infant mortality at the age of death that you hadn’t expected and that really surprised you?

Q:  What differences, if any, did you see in infant mortality among race and ethnic groups, or any other demographics?

Q:  What would you say is the take-home message of this report?

DE:  The most important message from this data brief is the lack of improvement in total infant mortality rates since 2011. Neonatal infants of all race and Hispanic origin groups we examined have higher mortality rates than postneonatal infants. Further, infants of non-Hispanic black women continue to have a higher risk of mortality than infants of non-Hispanic white, Asian or Pacific Islander, American Indian or Alaska Native, or Hispanic mothers. This information can further our understanding of current infant mortality trends and provide information on where improvements can be made.

Higher rates were primarily in the southern states. In addition to Alabama, two other states had rates >8.00 (Arkansas [8.20] and Mississippi [8.67]).

Differences Between Rural and Urban Areas in Mortality Rates for the Leading Causes of Infant Death: United States, 2013–2015

Questions for Danielle Ely, Ph.D., “Differences Between Rural and Urban Areas in Mortality Rates for the Leading Causes of Infant Death: United States, 2013–2015”

Q: Why did you decide to examine differences in mortality rates for the leading causes of infant death between rural and urban areas in the United States?

Q: Can you describe the differences in infant, neonatal, and postneonatal mortality rates?

Q: Overall, how did the mortality rate for the five leading causes of infant death vary by urbanization level?

DE: Rural areas have higher infant, neonatal, and postneonatal mortality rates than urban areas. However, when we drill down by the leading causes of death by age of death, there are specific causes of death where infants in rural areas do experience lower mortality rates, such as mortality from low birthweight and from maternal complications. However, there are markedly higher mortality rates for both neonatal and postneonatal infants from congenital malformations, sudden infant death syndrome, and unintentional injuries in rural places than in urban.

Q: Were there any surprises in the findings from this report?

Q: What is the take home message in this report?

DE: The message that should be taken from this report is that different types of places– rural and urban– have different issues when it comes to the leading causes of infant death. Although the leading causes are generally the same across areas, there are substantial differences in rates, meaning different public health interventions may be needed for people in rural areas compared to people in urban areas to address these issues.

For all three urbanization levels, infant mortality rates were significantly lower in 2015, compared with rates in 2007.

Infant Mortality Rates in Rural and Urban Areas in the United States, 2014

Questions for Danielle Ely, Ph.D., Statistician and Lead Author of “Infant Mortality Rates in Rural and Urban Areas in the United States, 2014”

Q: What is the most significant finding in your study?

DE: The most significant finding in this study was the consistency with which infants in rural areas have significantly higher mortality rates than infants in urban places. Higher rural infant mortality was generally observed by race and Hispanic origin, mother’s age, and by infant age at death.

Q: Why are infant mortality rates higher in rural areas vs urban areas?

DE: Generally, previous research shows that health outcomes are poorer in rural places compared with urban places and this study is consistent with those findings. This study did not examine the factors that might be influencing the higher rural infant mortality in comparison with urban infant mortality.

Q: Is this surprising, or are problems with poverty, substance abuse, and health care that much worse in rural areas?

DE: Higher infant mortality in rural places compared with urban places is not necessarily surprising based on the number of other poor health outcomes (such as higher overall mortality rates, higher rates of disability) that rural residents have in comparison to urban residents.

Q: Are there any theories in the literature as to why this infant mortality disparity exists between rural and urban?

Q: Any other findings of note that you find significant?

DE: These findings highlight the importance of place for infant survival and suggests the need for including place in research on health outcomes, as well as a need for further research on the greater risk of infant death in rural settings.

Q: What findings in your new data analyses on births and infant mortality most surprised you and why?

LR:  These latest quarterly provisional estimates suggest that the steady decline in teen birth rates that we have seen over the past several years is continuing into 2017, which is good news. What is of concern is the recent uptick in preterm birth rates, a trend that emerged in 2015 and that has unfortunately continued into 2016 and early 2017.

LR:  The most recent Quarterly Provisional Estimates provide an update to some of the data released in the recent report, Births: Provisional Data for 2016. That report is similar to previous “preliminary birth data” reports, but is redesigned and released under our Vital Statistics Rapid Release (VSRR) program. We hope that the VSRR program can be a one-stop-shop for our provisional vital statistics data. The Quarterly Provisional Estimates describe very recent trends in key indicators of maternal and infant health from the birth and mortality data the report, Births: Provisional Data for 2016, provides some critical context for understanding these recent trends.  report also describes some additional demographic and reproductive health indicators that aren’t yet available in the Quarterly Provisional Estimates, such as birth rates by race and Hispanic origin, as well as the timing of prenatal care.

Q: What in your data analyses can be attributed to no change in infant mortality in the last few quarters?

LR: is another surprising and concerning finding, because infant mortality rates have generally been declining over the past decade, at least through 2014. These declines seem to have leveled off more recently, according to our provisional estimates. We can’t speak to why infant mortality rates might no longer be declining, but we are planning future research to help us better understand this troubling trend.

Q: What differences did you see among various age groups of mothers?

LR: There is a great deal of detail in the recent report, Births: Provisional Data for 2016, discussing how age-specific birth rates have changed recently. Generally, both that report and our recent Quarterly Provisional Estimates show that maternal age is increasing. Birth rates among younger women (under 30) are going down, while those among women 35 and up are increasing.

Q: What are seasonal fluctuations in the number of infant deaths and births, and what do you mean by accounting for seasonality as you described in your report’s preface?

LR: People may not think that there are seasonal patterns to births, but it turns out that there are more babies born in the third quarter of the year, from July-September, than during other parts of the year. There are seasonal patterns in other indicators as well. For example, preterm birth rates dip slightly in the third quarter compared with other quarters, while infant mortality rates tend to be a bit higher in the beginning of the year than toward the end of the year. So to ensure that any differences we find aren’t influenced by seasonal fluctuations, we only compare the most recent quarter with the same quarter from the previous year. We also present 12 month-ending estimates, which include all seasons of the year, and thus aren’t subject to seasonal ups and downs.

New Preliminary 2016 Data on Births and Deaths in U.S. 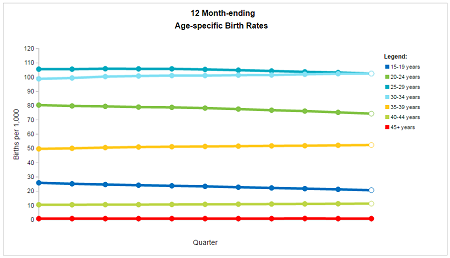 The Vital Statistics Rapid Release program provides access to the timeliest vital statistics for public health surveillance, through 1) releases of Quarterly Provisional Estimates and 2) Special Reports based on a current flow of vital statistics data from state vital records offices.