A new chart presents the age-adjusted death rates for the top 10 leading causes of death in the United States, including mortality patterns from 1999 through 2013, and by state of residence for selected year and cause of death.

The state of New Jersey scores lower than the nation overall in births to unmarried mothers and teen births.

However, among the 10 leading causes of death in the United States, the garden state has mortality rates that are higher than the U.S. rates for the following causes: cancer, chronic lower respiratory diseases, stroke, accidents, Alzheimer’s Disease, diabetes, influenza/pneumonia and suicide.

Cervical cancer once was the leading cause of cancer death for women in the U.S., and although the cases and deaths of cervical cancer have decreased over the past 40 years due largely to regular Pap tests, the disease still was responsible for almost 4,000 deaths in 2006 (most recent data available). The rates vary somewhat, but not widely, by state. See how your area compares below.

10 Leading Causes of Violence-Related Injury Deaths in the United States in 2006, for all races, both sexes, and all ages. 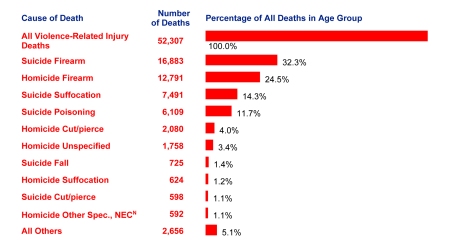 How does your state fare when it comes to death rates from flu and pneumonia?

A brief look at heart disease

As a farewell to “American Heart Month,” here’s a brief synopsis of why the heart and its health affects so many of us: