QuickStats: Percentage of Adults Aged 20 Years or Older Who Used Antidepressant Medications in the Past 30 Days by Sex and Marital Status

Antidepressant use was higher among divorced, separated, or widowed (20.5%) adults than among either married or living with partner (12.3%) or never married (10.8%) adults.

There was no difference in use between married and never married adults.

These same patterns were observed for both men and women. Within every marital status category, a higher percentage of women compared with men took antidepressants.

Questions for Lead Author Sally Curtin, Health Statistician, of “Mortality Among Adults Aged 25 and Over by Marital Status: United States, 2010–2017.”

Q: This study seems to confirm what other research has concluded, that married people tend to live longer.  Would that be a correct assumption?

SC:  Yes, many studies have found that married people have better health and live longer than unmarried people.   In this report, we are presenting age-adjusted death rates which clearly show that the rates are lower for married than never-married, divorced or widowed adults.  In addition, the age-adjusted death rate for married adults declined 7% over the period, the largest decline of any group.

Q: There are a lot of jokes and other narratives in pop culture that married life is far from ideal, and yet these results seem to at least suggest that there is one major positive outcome related to the institution.  Do you know why that is?

SC:  There has been much research over the years on the pathways through which marriage might work to result in better health outcomes.  In particular, researchers have explored the question of whether marriage is selective for good health or whether the institution itself is protective of health.  By selective, I mean that people who are healthier, or who have correlates of better health (e.g. more education, higher income), are more likely to marry.  This is true for the most part.  However, there has also been research that has shown that marriage is protective of health, particularly for men, because married people are more likely to have health insurance, and a spouse may encourage better lifestyle and health habits as well as assist in healthcare related activities (scheduling doctor’s appointments, etc…).  For example, a 2014 NCHS report found that among men with health insurance, those who were married were more likely than their unmarried counterparts (including those who were cohabiting) to seek preventive health services.

Q: Was this the first time you studied this topic?

SC: NCHS publishes age-adjusted death rates by marital status every year in their final death report.  However, this is the first specialized report on this topic in almost 50 years.

Q: Was there anything in the findings that were surprising?

SC: I think it was the fact that even though age-adjusted death rates are much lower for married adults, these rates declined 7% between 2010 and 2017.  This was the greatest decline of all groups–rates for never married persons declined by 2%, rates for divorced persons remained stable, and rates for widowed persons actually increased, by 6%.

Q: The patterns seem pretty consistent among men and women.  Was there anything that you found between the genders that was inconsistent?

SC: Both men and women had 7% declines in the age-adjusted death rate for married persons.  However, for men, the other groups remained relatively stable from 2010 to 2017.  For women, those who were divorced had stable death rates but never-married women had a decline of 3% while widowed women had a 6% increase.

SC:  Just that the next step is to look at these findings by selected causes of death to determine whether the lower death rates for married adults are broad across most of the leading causes or contained to a few specific causes.

Marriage and Divorce, Stat of the Day | 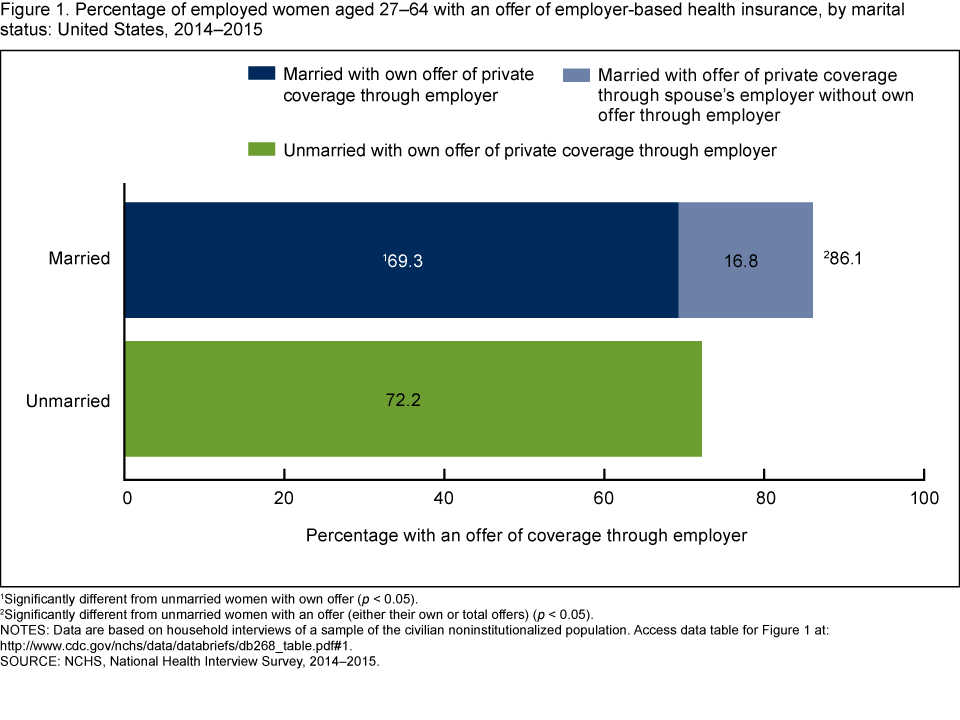 Q: Why did you decide to do a report comparing the marital status and offers of employer-based health insurance for employed women?

RC: A recent study found that women were less likely than men to have been insured through own employer and more likely to have been covered as a dependent. This report describes the association of marital status and the presence of employment-based insurance offers among employed women in the United States. It is important to note, that the presence of an offer does not necessarily indicated take-up.

Q: Is this the first time the National Health Interview Survey (NHIS) has released a report on this topic? If not, where is trend data available?

RC: This is the first time that NHIS has released a report on the association of marital status and of offers of employer-based private health insurance coverage for employed women.

Q: In general, how do offers of employer-based health insurance for employed women vary by marital status?

Q: How do offers of employer-based health insurance vary by marital status for employed women within categories of educational attainment?

Q: Do offers of employer-based health insurance vary by marital status for employed women aged within categories of race and ethnicity?

An NCHS report describes attitudes about marriage, childbearing, and sexual behavior among men and women aged 15–44 in the United States based on the 2002, 2006–2010, and 2011–2013 National Survey of Family Growth.

The latest in-depth data on marriage and cohabition (2002) is available here. This report features the probability that a first marriage will remain intact by sex, race, ethnicity, education, and family structure.