Biggest Increase in the Marriage Rate During 2020 Occurred in… Montana?

There were many social and health markers that were significantly disrupted in 2020 with the arrival of the pandemic.  Increases in mortality and declines in people seeking medical care during 2020 are well-documented, as is the sharp decline in fertility.   Employment levels and other economic indicators were greatly impacted, as was the workplace itself.  Education at all levels was faced with unprecedented challenges in 2020.

WHAT HAPPENS IN VEGAS DIDN’T HAPPEN AS MUCH IN 2020

Some of the changes in 2020 may be partly due to reporting issues, which also became a factor during the pandemic.

State-by-state comparisons are available on the CDC/NCHS web site at: https://www.cdc.gov/nchs/pressroom/stats_of_the_states.htm.

Questions for Sally Curtin, Health Statistician and Lead Author of “Marriage Rates in the United States, 1900–2018.”

Q: Why did you decide to do a report on marriages?

SC: NCHS computes and publishes marriage rates every year, in total and by State.  As we were working on the 2018 rates, we noticed that the rate had declined yet again, to an all-time low.  This prompted us to write a report looking at the trend over the long term, to help put the 2018 rate in perspective.

SC: The message is that a declining trend in the marriage rate which began in the early 1980s has continued into the 21st century and now the rate is at an all-time low, even lower than in the heart of the Great Depression.

Q: Do you have demographic breakdowns of U.S. marriage rates?

SC: NCHS collects counts of marriages but no longer collects detailed information on marriages—the characteristics of brides and groom from marriage certificates.  This collection ceased in the mid-1990s due to budgetary and priority considerations. But we do know from other data sources, namely data from the Current Population Survey from the Census Bureau, that the average age at first marriage has continued to increase and is about age 30 for males now and age 28 for females.

Fact or Fiction: Is the marriage rate in America at the lowest it’s been in over a century? 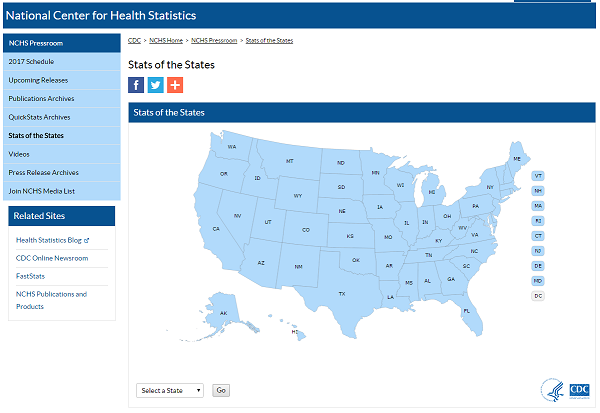 Fact or Fiction: Is Nevada the Marriage Capital of the U.S.?

Las Vegas has earned – for better or worse – a reputation for quick weddings. The city came to be known as the Marriage Capital of the World as a result of the ease of acquiring a marriage license and the minimal costs involved. Las Vegas comprises a large part of Clark County, where the County’s website features a prominent page for marriage licenses.

So, has “the Vegas factor” been enough to position – and keep — Nevada in the U.S. lead for marriage?

According to NCHS data from the National Vital Statistics System, the Vegas factor certainly looks like it’s had major influence on the overall marriage rate in Nevada. While the state’s marriage rate has declined significantly since 1990, Nevada is still number one! The most recent marriage rate of 36.9 (provisional rate of marriages per 1,000 people performed in Nevada during 2011) shows that so many couples tie the knot in the Silver State that it ranked number one nationally in marriage rates – by a long shot. Hawaii ranked second with a marriage rate of 17.6 (due, presumably, to “the weather factor”).

The latest in-depth data on marriage and cohabition (2002) is available here. This report features the probability that a first marriage will remain intact by sex, race, ethnicity, education, and family structure.

Provisional marriage and divorce data for 2006 are available at the NCHS website.

Do 50% of marriages end in divorce?

We get this question all the time and the best we can say is that we don’t know. Based on data produced by the National Survey of Family Growth, 43% of first marriages by women aged 15-44 will end in a “disruption” within 15 years. Disruption is defined as either separation or divorce. As not all separations end in divorce (see Table 33 at the link) is would seem that the 50% figure is an overstatement.

The inestimable Cecil Adams of The Straight Dope takes a look at this “fact” and its probable genesis. While not endorsing this view, anyone writing about marriage and divorce should certainly consider the references he provides.