Q: How has the prevalence of high total cholesterol among US adults changed since 1999-2000 data and and low high-density lipoprotein cholesterol (HDL-C) since 2007-2008?

Q: Can you summarize how the data varied by sex, age groups and race?

The prevalence of low HDL-C:

MC: Although we weren’t surprised because the results have been seen in the past, men continue to have a much higher prevalence of low HDL-C compared to women.

Contribution of Whole Grains to Total Grains Intake Among Adults Aged 20 and Over: United States, 2013–2016 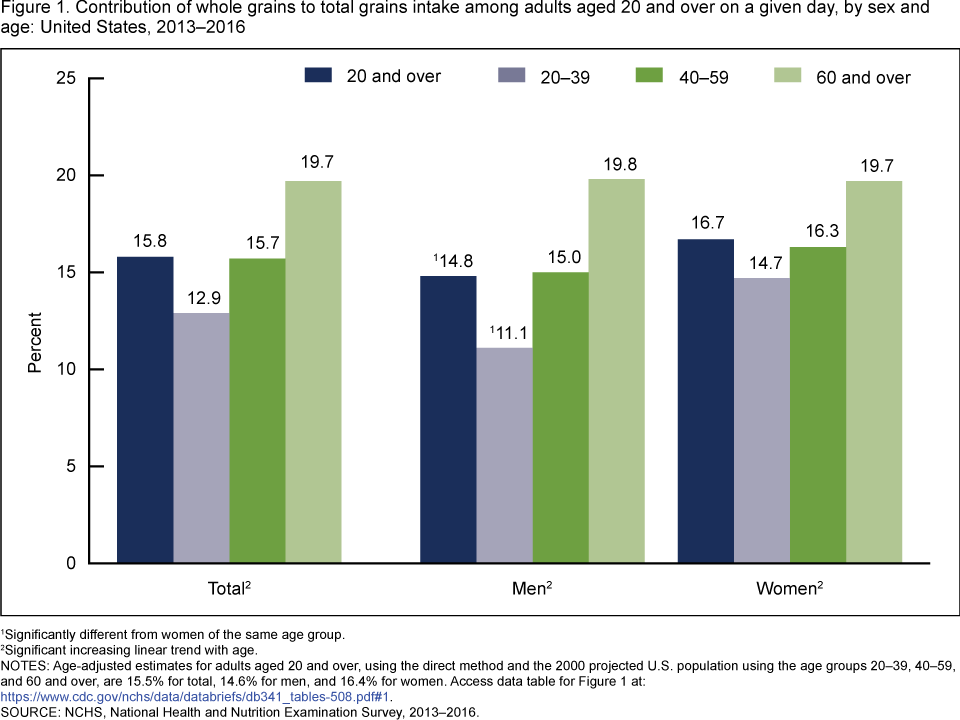 New NCHS report provides estimates of the percentage of total grains intake consumed from whole grains sources, for U.S. adults aged 20 and over who reported consumption of grains (98.6%) on a given day during 2013–2016.

March is National Nutrition month, making it a great time to look at where America stands in its nutrition and diet.  One important nutrient is protein, which is essential to the human body because it is part of every cell, issue, and organ, allowing them to grow and repair. Proteins can be found in a variety of foods that we eat on a regular basis and the table below displays the Centers for Disease Control and Prevention’s recommended daily protein intake.

Source: Centers for Disease Control and Prevention; “Nutrition for Everyone”-Protein

However, according to the 2005-2006 National Health and Nutrition Examination Survey (NHANES), both men and women ages 20 and over were taking in much more than the recommended amount of protein. The recommended daily amount of protein is 46 grams for women and 56 grams for men. The NHANES results showed that men were taking in 101.9 grams and women were taking in 70.1 grams. Protein intake contributes to calorie intake: therefore, if you eat more protein than is needed, your overall calorie intake could be greater and potentially lead to weight gain.

For more, visit USDA’s “What We Eat in America.”