New NCHS report presents complete period life tables for each of the 50 states and the District of Columbia by sex based on age-specific death rates in 2018. 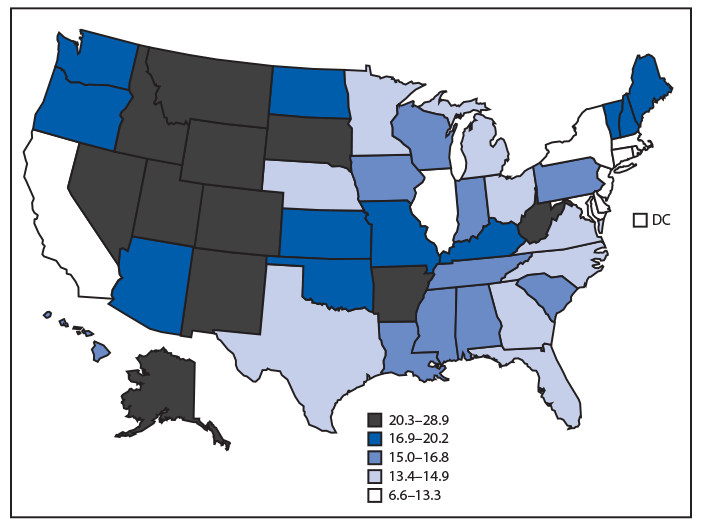 Q: Why did you decide to do a report on the total fertility rate in the United States?

BH: We produced this report because we were interested in what differences there were in the total fertility rate (TFR) by state and population group (race and Hispanic origin). This report presents the TFR for each state in 2017, both overall and for the three largest population groups — non-Hispanic white, non-Hispanic black, and Hispanic. As noted in the report, fertility levels affect the size and composition of the population, and family size is associated with female labor force participation and economic growth, as well as other social and economic changes.

Q: How did total fertility rates vary by state and race in 2017?

Q: Do you have trend data on total fertility rates that goes back 10 or 20 years?

Q: Is there a finding in this report that surprised you?

Questions for Joyce A. Martin, M.P.H., Demographer, Statistician, and Lead Author on “Births: Final Data for 2015”

Q: Was there a result in your study’s analysis of births in the United States that you hadn’t expected and that really surprised you?

JM: Although small, (from 9.57% to 9.63%) the rise in the preterm birth rate (births of less than 37 completed weeks of gestation) was unexpected. This rate had been declining steadily since 2007.

Q: What is the difference between this new births report and the other reports your office produced on 2015 birth data, like the preliminary data report on 2015 births and the Data Brief on teen births?

JM: The annual report “Births: Final Data for 2015” offers substantially more detail (e.g., age, race and Hispanic origin of mother, state) on key topics, than does the report on preliminary birth statistics (“Births: Preliminary Data for 2015”). The final report also includes information on topics not included in the preliminary reports such as multiple births, attendant and place of birth, birth order and birth rates for fathers.

Q: How has the number of births in the United States changed in 2015 from previous years?

Q: What differences, if any, did you see among race and ethnic groups, and among various ages?

JM: Of continued concern are the higher risks of poor birth outcomes as measured by levels of preterm birth and low birthweight among non-Hispanic black mothers compared with total births and other race and Hispanic origin groups. For example, in 2015 the preterm birth rate for births to non-Hispanic black mothers was more than 50% higher at 13.41% than for non-Hispanic white women (8.88%) and nearly 50% higher than the rate for births to Hispanic mothers (9.14%).

Q: Did you observe any regional or state differences in this study on births?

JM: Differences by state were observed for many of the demographic and medical/health items included in the 2015 final birth report. For example, from 2014 to 2015, the general fertility rate–which is the number of births per 1,000 women aged 15–44–declined in eight states and was essentially unchanged in the 42 states and the District of Columbia (DC). In 2015, the general fertility rate ranged among states from 51.1 births per 1,000 women aged 15–44 in Vermont to 78.2 in South Dakota.

Also, increases in preterm birth rates were limited to four states from 2014 to 2015: Arkansas, California, Nebraska, and North Carolina. Rates declined in four states: Montana, New York, Texas and Wyoming. Nonsignificant differences were reported for the remaining states and DC.

Q & A from Lead Author of “State Variation in Electronic Sharing of Information in Physician Offices: United States, 2015”

Questions for Eric Jamoom, Research Scientist Officer at the Collaborating Center for Questionnaire Design and Evaluation Research and Lead Author on “State Variation in Electronic Sharing of Information in Physician Offices: United States, 2015.”

Q: What findings in the report surprised you and why?

EJ: In this data brief, we are capturing for the first time four elements for measuring the electronic sharing of health information. Specifically, we now have insight into the number of office-based physicians that electronically sent, received, integrated and searched for patient health information from other providers.

Coupled with the recent release of a September 2, 2016 MMWR Quickstat that provided estimates on the number of physicians having electronic access to patient health information at the point of care, information is now available about the state of electronic information sharing by office-based physicians in the United States.

Q: How many office-based physicians electronically sent, received, integrated or searched for patient health information from other providers in 2015?

EJ: In 2015, roughly one-third of physicians indicated they either electronically sent, received, integrated, or searched patient health information in 2015.

Q: Which states did you find that electronically sent patient health information to other providers that were higher and lower than the national average?

Q: Can you explain what you found from state variation among physicians who had electronically searched for information from other providers?

EJ: In 2015, 34% of physicians had electronically searched for patient health information from other providers, ranging from 15.1% in the District of Columbia to 61.2% in Oregon. Five states, which include Texas, Oklahoma, Missouri, Mississippi, and Pennsylvania, as well as the District of Columbia were significantly less than the national percentage. Whereas, 10 states were significantly greater than the national percentage: Alaska, Oregon, Washington, Colorado, Wisconsin, Ohio, North Carolina, Virginia, Maryland, and Delaware.

Q: Do you have trend data that goes further back than 2015 on this topic?

Q: Why did you decide to study state variation in electronic sharing of information in physician offices?

In 2015, a federal plan was published to enhance the nation’s health IT infrastructure to support sending, receiving, integrating, and searching for patient health information electronically. The 2015 data from the National Electronic Health Records Survey provides national and state based estimates about physician EHR adoption and use.

In 2015, 77.9% of office-based physicians had a certified EHR system, up from 74.1% in 2014. A federal plan to enhance the nation’s health information technology infrastructure was published in 2015 to support information sharing.

A new NCHS report uses the 2015 National Electronic Health Records Survey to describe the extent to which physicians can electronically send, receive, integrate, and search for patient health information.