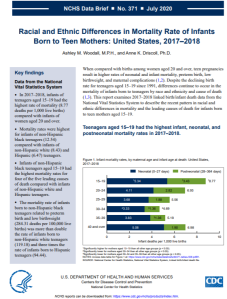 Q: Why did you decide to focus on teenagers for this report?

Q: Can you summarize some of the findings?

AW: We were surprised by the large racial and ethnic disparity in deaths for preterm- and low-birthweight-related causes. This finding suggests that preterm birth and low birthweight are significant contributing factors for death among infants born to non-Hispanic black teenagers.

Q: Can you explain the difference between total infant, neonatal, and postneonatal mortality rates?

New NCHS report presents changes in state-specific birth rates for teenagers between 2017 and 2018 by race and Hispanic origin of mother.

Q: What is new in this report from the 2018 provisional birth report?

JM: In addition to providing final numbers and rates for numerous birth characteristics such as fertility rates, teen childbearing, cesarean delivery and preterm and low birthweight, this report presents final information on  teen childbearing by race and Hispanic origin and by state, births to unmarried women, tobacco use during pregnancy, source of payment for the delivery and twin and triplet childbearing.

Q: Was there a specific finding in the 2018 final birth data that surprised you?

JM: These data are based on information for all birth certificates registered in the United States for 2018.

JM: Birth certificate data provide a wealth of important current and trend information on demographic and maternal and infant health characteristics for the United States.

Q: Why do you think the birth has dropped in the U.S.?

JM: The factors associated with family formation and childbearing are numerous and complex, involving psychological, cultural, demographic, and socio-economic influences. The data on which the report is based come from all birth certificates registered in the U.S. While the data provide a wealth of information on topics such as the number of births occurring in small areas, to small population groups, and for rare health outcomes, the data do not provide information on the attitudes and behavior of the parents regarding family formation and childbearing. Accordingly, the data in and of itself cannot answer the question of why births have dropped in the U.S.

Q: How does the provisional 2018 birth data compare to previous years?

Q: When do you expect the final 2018 birth report to come out?

Q: How did the data vary by age and race?

Q: Was there a specific finding in the provisional data that surprised you?

BH: The report includes a number of interesting findings. The record lows reached for the general fertility rate, the total fertility rate and birth rates for females aged 15-19, 15-17, 18-19, and 20-24 are noteworthy. In addition, the magnitude of the continued decline in the birth rate for teens aged 15-19, down 7% from 2017 to 2018, is also historic.

BH:  The number of births for the United States was down 2% from 2017 to 2018, as were the general fertility rate and the total fertility rate, with both at record lows in 2018. Birth rates declined for nearly all age groups of women under 35, but rose for women in their late 30s and early 40s. The birth rate for teenagers aged 15–19 was down 7% from 2017 to 2018. The cesarean delivery rate and low-risk cesarean delivery rate were down in 2018. The preterm birth rate rose for the fourth year in a row in 2018.

Q: Do you anticipate this drop will continue?

BH: The factors associated with family formation and childbearing are numerous and complex. The data on which the report are based come from all birth certificates registered in the U.S. While the scope of these data is wide, with detailed demographic and health   information on rare events, small areas, or small population groups, the data do not provide information on the attitudes and behavior of the parents regarding family formation and childbearing. Accordingly, these data do not answer the question of why the number of births dropped in 2018 or if the decline will continue.

Q: What did you think was the most interesting finding in your new analysis?

BH: The report includes a number of very interesting findings. The general fertility rate, 60.2 births per 1,000 women aged 15–44, declining 3% in 2017 and reaching a record low is certainly noteworthy. In addition, the continued decline in the birth rate for teens, down 7% from 2016 to in 2017, and reaching another record low, is very significant. The increase in the cesarean delivery rate following several years of decline is noteworthy as are the recent increase in rates of preterm and low birthweight births.

Q: Why does fertility keep going down in the U.S.?

BH: In general, there are a number of factors associated with fertility. The data on which the report is based comes from the birth certificates registered for births in the U.S. While the scope of this data is essentially all births in the country, and provides detailed information about rare events, small areas, or small population groups, the data does not provide information about the parent’s decision to have (or not have) a child. And so, accordingly, we cannot examine the “why” of the changes and trends in births.

Q: Does the decline in the Total Fertility Rate essentially mean fertility is down below “replacement” levels?  Could you explain this in general terms?

Q: Do the increases among women over 40 suggest a “new norm” in people waiting till much later to have children?

BH: Birth rates for women aged 40-44 and 45-49 years have increased generally over the last 3 decades. Given this, it reasonable to expect this trend to continue.

Q: Are the annual declines in teen pregnancy something that we are in danger of taking for granted?

Q: Can you explain how the increases in preterm births and low birthweight are connected?

BH: Infants born preterm are also often, but not exclusively, born low birthweight and vice-versa.  The causes of the recent upward shift in these rates are not well understood.

Q: Why did you decide to examine trends in births to females aged 10-14 in the U.S.?

TM: We have published data on births to females aged 10-14 for decades but only once before have we published data specific to this group. We decided this significant decline was noteworthy and needed publishing.

Q: What differences or similarities did you see among race and Hispanic origins in this analysis?

TM: From 2000 to 2016, all groups observed declines in the birth rate for this age group. The largest decline was seen for non-Hispanic black females, a decline of 79%. This group had the highest rate in both time periods.

TM: While we didn’t study trends in birth rates to 15-19 year olds in this publication we have been reporting significant declines for this age group over this time period.

Q: Were there any surprises in the findings from this report?

Q: What is the take home message in this report?

TM: Birth and birth rates to females aged 10-14 in the U.S. have declined significantly since 2000.  Disparities by race and Hispanic origin and by state persist. 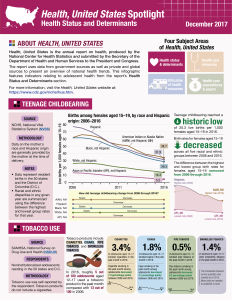 mitted by the Secretary of the Department of Health and Human Services to the President and Congress.

Content includes selected indicators on important public health issues from the report’s four subject areas: health status and determinants, utilization of health resources, health care resources, and health care expenditures and payers. Like the report, the Spotlights display the most current data available and, where possible, trends over a ten-year period.

For some indicators, a different set of data years or combined years of data may be shown, depending on survey cycles and design changes. Data sources are identified for each health indicator to enable further exploration and include data systems from both the National Center for Health Statistics and partnering government and private agencies. Changes over time and differences among groups are presented using standard statistical techniques used in Health, United States.

Q: Why did you decide to change the name of the report from preliminary to provisional?

BH: report is part of the National Vital Statistics System, Vital Statistics Rapid Release provisional data series which replaces the preliminary report series to provide a consistent set of quarterly and annual data releases. Except for small changes in record weights, the same processing procedure was used for provisional as was used for the preliminary data and the data are comparable.

Q: How does provisional 2016 data on U.S. births overall compare to previous years?

Birth rates declined for women in all age groups under 30 years between 2015 and 2016, to record lows for all groups, whereas the rates for women in their 30s and 40s rose.

Q: How has the birth rate changed for U.S. teenagers in provisional 2016 data?

Q: Was there anything in the 2016 provisional birth data that surprised you?

BH: Apart from the continued, unprecedented decline in teen birth, it is worth noting that women aged 30-34 have the highest birth rate (102.6 births per 1,000 women) in 2016 than any other age group. Since 1983, the rate for women in their late thirties was the highest.

BH: The number of births and general fertility rate were down in 2016, as were the rates for women under 30 years of age.  The percentage of births beginning prenatal care in the first trimester and the cesarean delivery rate were also down in 2016, whereas preterm birth and low birthweight rates rose.