QuickStats: Age-Adjusted Percentage of Adults Aged 25–64 Years Who Are Very Worried About Their Ability to Pay Medical Bills if They Get Sick or Have an Accident, by Sex and Veteran Status

In 2019, among adults aged 25–64 years, veterans (11.5%) were less likely than nonveterans (20.1%) to be very worried about their ability to pay their medical bills if they get sick or have an accident.

This pattern was found for both men and women, with veterans less likely than nonveterans to be very worried about medical bills: 11.4% versus 17.5% for men and 12.5% versus 22.4% for women, respectively. 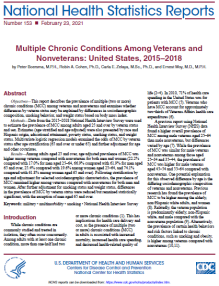 A new NCHS report describes the prevalence of multiple (two or more) chronic conditions (MCC) among veterans and nonveterans and examines whether differences by veteran status may be explained by differences in sociodemographic composition, smoking behavior, and weight status based on body mass index. 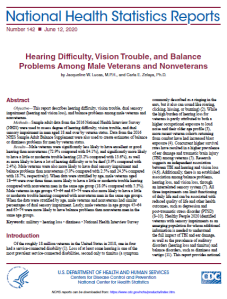 Q: Why does NCHS conduct studies on U.S. Veterans?

JL: Veterans are known to differ in their health and health care access and utilization from non-veterans. NCHS surveys are uniquely positioned to collect information on all US veterans in the civilian noninstitutionalized population of the United States.

Q: Why did you specifically focus on male Veterans?

Q: Can you summarize how the data varied by male Veterans and nonveterans?

JL: We hadn’t seen much in the literature about balance problems in veterans, so we were surprised to see that veterans were more likely to have balance problems than nonveterans. Additionally, we were surprised to see that male veterans aged 18-44 were 3 times more likely to have a little or moderate hearing trouble than nonveterans in the same age group.

JL: We’ve tended to think of veterans with health concerns as older men who served years ago in earlier conflicts. The population of post 9/11 veterans is increasing relative to the population of veterans from previous combat cohorts. This includes younger veterans whose serviced in Operation Iraqi Freedom (OIF) and Operation Enduring Freedom (OEF). Our findings can be a starting point for expanded research into other demographic and health comorbidities that may be related to hearing loss and other sensory impairments in veterans.