FRAX-based Estimates of 10-year Probability of Hip and Major Osteoporotic Fracture Among Adults Aged 40 and Over: United States, 2013 and 2014

NCHS released a new report that uses FRAX estimates from the National Health and Nutrition Examination Survey 2013–2014 to describe the hip and major osteoporotic fracture probability distribution (for adults aged 40 and over) and prevalence of elevated probabilities (for adults aged 50 and over) in the United States.

The report defines the distribution of the probabilities of having a hip or major osteoporotic (hip, spine, forearm, humerus) fracture in the next 10 years among middle-aged and older US adults.  For example, prior to this report, NCHS didn’t know what the average 10-year probability of having one of these fracture types was in this age range.  NCHS also looked at the prevalence of elevated probabilities for these fractures in adults age 50+ years using thresholds defined by the National Osteoporosis Foundation for that age range.

FRAX algorithms are proprietary equations developed by researchers at the World Health Organization (WHO) Collaborating Center on Metabolic Bone Diseases, University of Sheffield, UK, to estimate the probability of having a hip or major osteoporotic fracture in the next 10 years.  These equations use age, sex, body mass index, femur neck bone density, and several health and lifestyle variables (smoking, alcohol consumption, personal and parental fracture history, glucocorticoid use, rheumatoid arthritis) to predict these 10-year probabilities.  The equations also account for race and Hispanic origin, because race-specific equations were developed for use in the U.S.

Questions for T.J. Mathews, M.S., Demographer, Statistician, and Lead Author of “Trends in Infant Mortality in the United States, 2005-2014”

Q:  Was there a result in your study’s analysis of infant mortality that you hadn’t expected and that really surprised you?

TM:  Though not unexpected, the pervasive and large decrease in infant mortality that is documented in the report is quite striking. While we had been observing slight declines in the infant mortality rate, it’s very good news to see significant declines over the past decade.

Q:  Why did you conduct this study on a decade of infant mortality in the United States?

TM:  We produced this report because infant mortality is an important public health measure. The United States does not compare well with other developed countries. Measuring and understanding the changes in infant mortality rates over time — and identifying who has been impacted by those changes — is critical.

Q:  What differences, if any, did you see in infant mortality among race and ethnic groups?

Q:  What is the “period linked birth/infant death data set” that you reference as a source for the statistics in your report?

Q: What is the take-home message of this report?

The rates for males and females  followed the overall pattern; however, the rate for males was approximately 3–5 times higher than the rate for females throughout the study period. 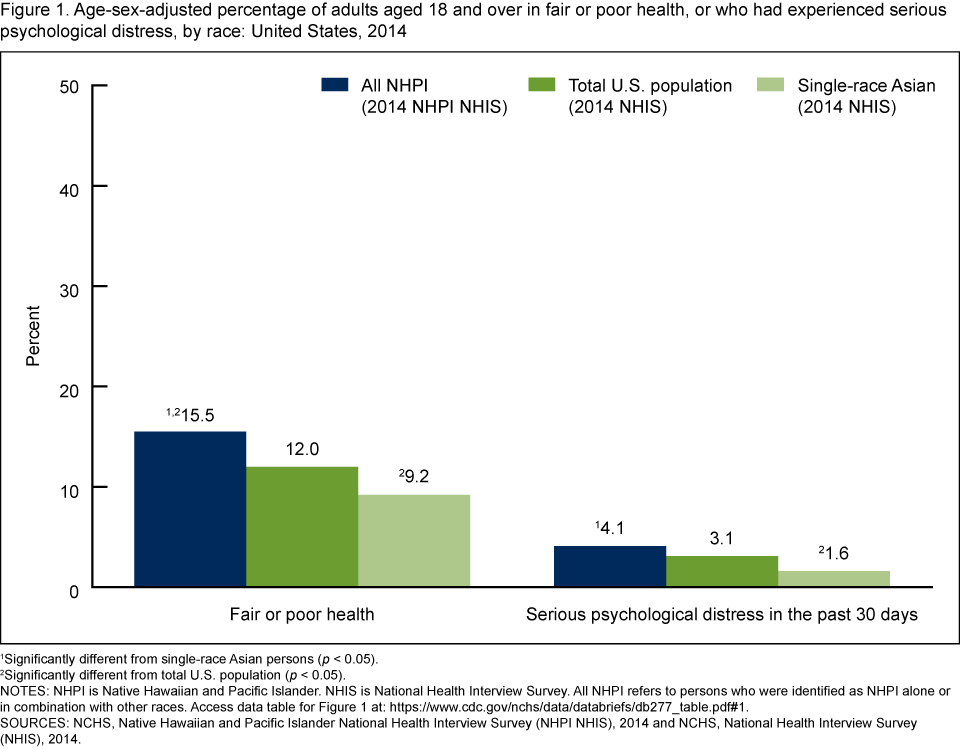 Q: Why did you decide to look at clinical preventive services for cancer and heart disease among insured adults?

AV: Heart disease and cancer are the top two leading causes of death in the United States. The clinical preventive services discussed in this report are recommended for the prevention or early detection of heart disease and cancer. We limited our analysis to insured adults because most insurance plans were required to cover these clinical preventive services without co-payment from the insured adult in 2015.

Q: What did your report find out about cancer screenings among insured adults?

Q: What did your report find out about heart disease screenings among insured adults?

AV: In 2015, more than 8 in 10 insured adults aged 18 and over had their blood pressure checked by a doctor or other health professional, and about 2 in 3 overweight and obese insured adults aged 40-70 had a fasting blood test for high blood sugar or diabetes in the past 12 months. Receipt of these services increased with advancing age and varied by sex. Insured women aged 18-39 and 40-64 were more likely than their male peers to have their blood pressure checked in the past 12 months, and insured overweight and obese women aged 40-49 were more likely than men of the same age and BMI to have a fasting blood test or diabetes in the past 12 months.

Q: Was there a specific finding that you found surprising?

Q: What is the take home message of this report?

AV: Utilization of clinical preventive services aimed at the early detection of cancer and cardiovascular disease varied by sex and age among insured adults. Insured adults in their 40s and 50s were less likely than those in their 60s to be screened for colorectal cancer, high blood pressure, and diabetes. Limited knowledge about the recommendations for clinical preventive services may prevent eligible adults from seeking out timely preventive care.

During 2010–2015, a total of 2,244 deaths resulted from unintentional carbon monoxide poisoning, with the highest numbers of deaths each year occurring in winter months.

In 2015, a total of 393 deaths resulting from unintentional carbon monoxide poisoning occurred, with 36% of the deaths occurring in December, January, or February.

Q: Why did you conduct this study?

MZ: We produced this report because we wanted to offer statistics that highlight how regular physical activity can reduce illness from chronic diseases and premature death. In 2008, the Department of Health and Human Services released the Physical Activity Guidelines for Americans. We wanted to provide the most recent national estimates of low high-density lipoprotein (HDL) cholesterol (or serum HDL cholesterol less than 40 mg/dL) by whether or not adults met these national physical activity guidelines, and to understand how these patterns differed by sex, age, race and Hispanic origin, and education level.

Q: What caused you to focus your report on low HDL cholesterol and physical activity?

MZ: HDL cholesterol is known as the “good” cholesterol because having high levels can reduce the risk for cardiovascular disease. We know from previous research that regular physical activity can help increase HDL cholesterol levels.

Q: Was there a result in your study’s analysis that you hadn’t expected and that really surprised you?

MZ: The differences among some subgroups that we examined were quite striking. Our study confirmed that less active adults were more likely to have low HDL cholesterol. Interestingly, differences in low HDL cholesterol by physical activity were more pronounced in some subgroups we examined, including older adults (aged 60 and over), non-Hispanic whites, non-Hispanic blacks, and college graduates. More in-depth research is needed to explore why the association between physical activity and low HDL cholesterol levels is stronger for some groups than others.

Q: What differences, if any, did you see among race and ethnic groups?

MZ: Among non-Hispanic white and non-Hispanic black adults, low HDL cholesterol prevalence was significantly higher among those who did not meet the physical activity guidelines compared with those who met the guidelines.

Q: What is the take home message of this report?

MZ: I think the take home message of this report is that while sex and age can affect HDL cholesterol levels, there are also lifestyle changes that can improve HDL levels – and this includes being physically active and meeting the national physical activity guidelines.